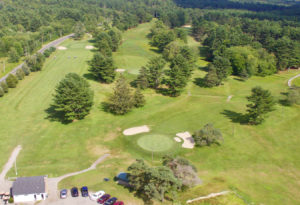 In 1959 Arnold Palmer was taking the golf world by storm. The charismatic Palmer was winning many tournaments with his “go-for-broke” style and his good looks. Golf was becoming a mainstream sport, and even this reporter had starting playing the game.

It was very similar to the affect that Tiger Woods had on the golf industry in the 1990’s when many new golf courses started popping up all over the country to meet the demand for the new interest in the sport.

Three chicken farmers saw this need and decided to build a golf course on their large property off Harkney Hill Rd. close to Johnson’s Pond. Gus and Roy Anderson, together with their brother Ronald started work on laying out a nine-hole course on part of their property using the farm equipment that they had on hand.

The course was designed and built by the brothers, who were not golfers, but had an excellent piece of land that had a couple of small streams running through it, a pond for irrigation and elevation changes to give the course some fine characteristics. They had some help with building a few greens (all pushup in the style favored at the time), but the brothers and their family accomplished the rest of the work.

The name Coventry Pines was easy to conceive, as the land was dotted with hundreds of pine trees that divided the fairways and gave the course a very nice look. The course was a success and business was doing quite well for the farmers who also maintained the chicken coops quite close to the ninth green.

The brothers were making plans to build another nine holes when things changed dramatically in 1964. The State of Rhode Island had determined that the Scituate Reservoir was not large enough to sustain the water needs for all the residents who were using it for their water source, and a new reservoir had to be added.

Coventry Pines G.C. sat in the far northwest corner of this 8,300-acre basin of the planned “Big River Reservoir” that included a small part of Coventry with most of the land extending into West Greenwich. The state took the land by eminent domain, as it was deemed necessary for the State to provide enough water for population that had been expected to grow to 1.4 million residents in the next 30 years. There were about 240 families on the property that were purchased by the state including the Anderson home that sat right next to the small clubhouse.

The golf course was allowed to remain open, as the Anderson’s agreed to lease land back from the state until construction of the reservoir began. But that never happened. The dam for the planned reservoir was going to be right next to the bridge on Harkney Hill Rd., but not interfering with Johnson’s Pond.

Coventry Pines stayed open as plans for the reservoir were put on hold, as more people started conserving water and the population of the state did not grow as was thought. Ultimately the federal government killed the plan. As the years went by, Richard Anderson (Roy’s son) and his wife Helen continued to lease the family land from the state. In 2012 with their lease about to expire the condition of the course declined. Old equipment was not replaced and the course fell into disrepair; not anything like its glory days when it was considered one of the better nine-hole courses in the state.

Coming to the rescue was Chris Anderson. Gus and Roy were his great-uncles and Ronald his grandfather.

Chris, 45, grew up in Coventry, but went away to high school and college and is now a lawyer. “I hated to see the golf course just close down,” recalled Chris who signed a new lease with the state to keep the land as a golf course.

He wasn’t sure what he had gotten into when he started in 2013. “The course had such ‘good bones’ and I was quite sure that I could bring it back to its glory days, but I didn’t realize how difficult it would be,” he added. “The equipment was in disrepair, the irrigation system was almost nonexistent due to age and theft, and so it was difficult to improve the course. It got so that I didn’t want to encourage people to come play golf at Coventry Pines.”

Dinwoodie comes with a great pedigree. His late father, Al, was a lifelong superintendent at Woodland Greens, Quidnessett and Foster. “I can remember working on sand traps helping my dad while I was still in junior high school,” said Dinwoodie who earned his superintendent’s license at the UMass-Stockbridge Winter program. “I can remember coming to Coventry Pines for the Superintendents’ Teen Day where we would golf and fish in the pond and have a great chicken barbeque,” added Dinwoodie.

“John’s knowledge and skill have really made a difference here,” said Chris who talked about the new irrigation that is now in place, the work on the greens, tees and fairways and their plans going forward. “I’m really proud to start telling people to come back to play Coventry Pines again,” said Chris with a huge smile on his face.

Coventry Pines is a fun and challenging course. It measures just over 3,000 yards for the nine holes, and it is designed to play differently from the white tees the first nine and the red tees on the second nine as the scorecard indicates. The fourth hole plays as a par 4 on the front and a par 5 from a back tee on the red.

One of the unique features of the course is the sixth hole. It is a tough par 5 where your drive has to fit into an opening. Your second shot is downhill and over a creek to elevated greens. That’s right, there are two greens, one for each nine (the second green will be opening soon, as it is being brought back to Dinwoodie standards).

“When my great-uncles built the course, they put two greens on number six, one for the front nine and one for the back, but since the ladies could play the closer green both times the greens quickly became referred to as the “Men’s: and “Ladies” greens recalled Chris Anderson.

The seventh hole requires a drive up a steep hill. Those pine trees require you to hit pretty straight drives. Hole 8 is a tough downhill par 3 and the ninth is short par 4 from a very elevated tee. “Someday I’d like to put a second green on nine to add to the variety of the round, but John (Dinwoodie) says we’ve got more important things to work on right now,” said Chris as he gazed over the course from the deck of the clubhouse. “It was thought that the reservoir’s height would have had water lapping right up to where we are sitting now,” he added with a smile.

We spoke to a couple of guys just finishing their round. Joe DeResta and Bob Forget talked about the course and why they play it. “We are treated like family here. The staff is so friendly and the course is really coming back to its former excellence,” they both echoed. “Our goal is to give the golfers a nice course at a very fair price with the best service possible,” said Chris who has added a simulator indoors for golfers to use during the winter or on rainy days. Give the course a try. You will enjoy the day. Coventry Pines is located off Exit 6 on Route 95.