While watching the Bay Hill Classic this week in Orlando I had many great memories of Arnold Palmer who started this tournament and whose name is attached to the event.

The memories go back to 1957 just before the Wethersfield Open outside of Hartford, CT. My dad, an excellent athlete, had recently taken up golf with his brothers. It was the result of the Arnold Effect, much similar to the Tiger Effect in the late 1990’s. Occasionally he would take me with him. His brother was a lefty like myself, and he had a real old set of mongrel clubs that he gave to me.

I took to golf like water to a fish and couldn’t get enough of it. The PGA Tour was stopping in Hartford and my dad asked if I wanted to go with him. What a thrill. As we were standing outside the ropes at one of the fairways, a player stopped by and tapped me on the shoulder and with a big smile said, “How are you doing son?” It was Arnold Palmer.

I never forgot that moment, and very fortunately I had the opportunity to talk to Mr. Palmer again. It was at the Golf Writers 50th Anniversary Dinner in Myrtle Beach.  Arnold Palmer was the guest speaker and he regaled the writers with a talk that lasted about 40 minutes. He received a standing ovation, and then started walking through the crowd. I stopped him and mentioned my memory at the Wethersfield Open. His reply was perfect—“Well isn’t that what you are supposed to do?’ He said he always looked to talk to someone in the crowd to say hello. What a great idea and too bad it

Just one other great memory of Arnold Palmer. I was covering my first U.S. Open at Oakmont in 1994. It was Arnold’s last Open, the temperature hovered around 100 degrees on the Friday and he was not making the cut. I was with good friend and fellow reporter Paul Kenyon from the Providence Journal, who had been covering golf tournaments for many years.

Mr. Palmer came into the press tent, obviously exhausted and drained of all emotion. He tried to speak, but started to cry. He put a towel over his head to try to compose himself. After about two minutes he took the towel off his head and tried to speak again.  He was not able to speak as tears 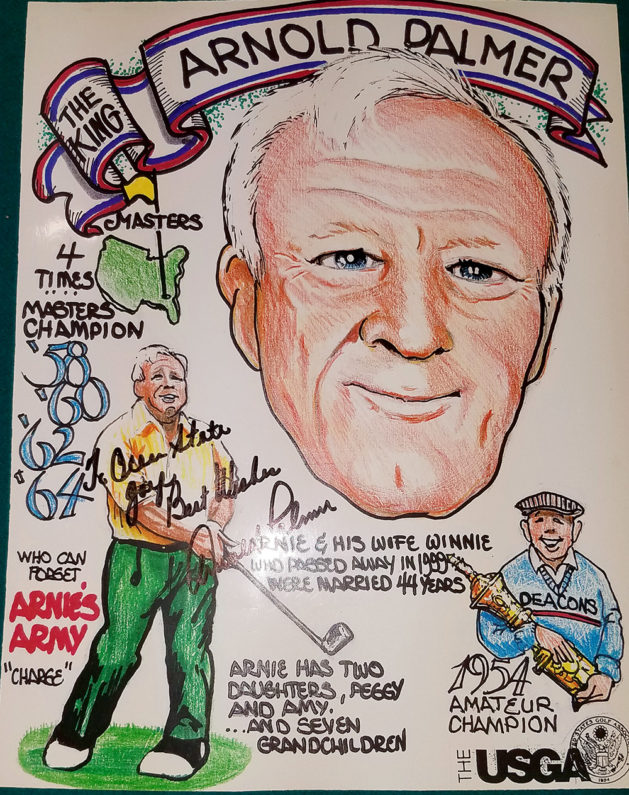 doesn’t happen more often, although some of the young guns are doing it more.

flowed down his cheeks. The entire press contingent of over two hundred rose as one and gave him a standing ovation. He nodded and was ushered out the back entrance. As we stood there with tears in our eyes, Paul turned to me and said, “You will never see anything like this as long as you cover golf tournaments.” He was right.

Arnold regaled the crowd with a story about Billy Andrade. Cell phones were just becoming popular and Palmer was on Billy’s contact list. Being an A for Arnold, he was first on the contacts. This became a problem as Billy’s son would always play with his dad’s phone and hit the first contact. “I was always getting calls from Billy Andrade,” said a smiling Palmer who said he came to the event to straighten out the cell phone problem.

Since Arnold Palmer was coming to Rhode Island we decided to do a caricature of him for our publication that was called Ocean State Golf at the time. George Braman was our artist who did these pictures in most every issue of the publication highlighting people that we were writing about. This was the only time that George and I wanted to get an autograph of one of his pieces. We made two copies of the caricature and mailed them to Arnold’s office in Latrobe, PA. In about three weeks we received two signed autographs of the picture. I still have it hanging in my office, and always get great comments.

At the Masters in Augusta, all former winners were allowed to compete up until a few years ago. Arnold always played the Par 3 event on the Wednesday before the start of the event. My favorite place to watch that fun event was behind the green at the last hole (9). Palmer hit his tee shot over the pond and landed past the hole. You could see it rolling back towards the hole and I took a picture as the ball was falling into the hole for a 1. It was the price picture in our issue that month.

There have been many great memories over the past 30 years of publishing, and fortunately for this reporter, many of them included Arnold Palmer.