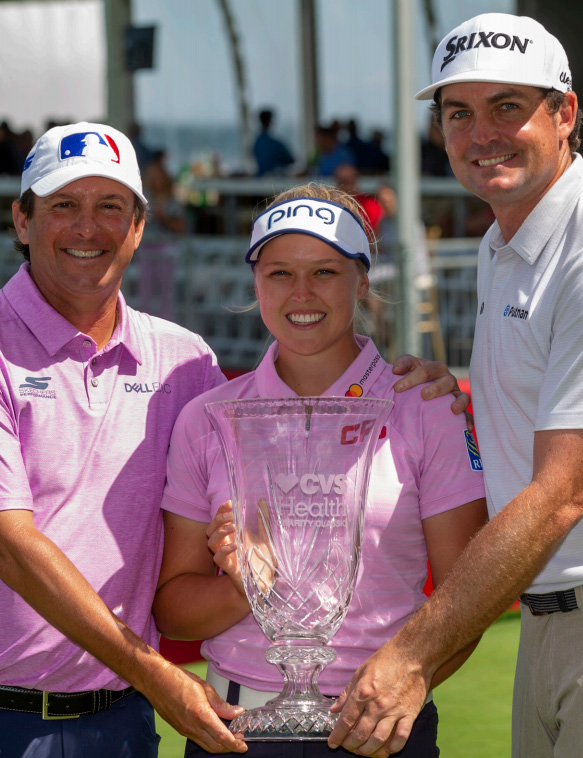 The 2019 season has brought immense success to the winning team. Bradley tied for second at the Travelers Championship just one day before participating in the Charity Classic while Andrade has earned six top 10 finishes this season. Henderson broke the Canadian record for most Tour wins after claiming her second LPGA title of the season at the Meijer LPGA Classic for Simply Give on June 16.

The winning team was the last to start. Billy Andrade birdied the first hole and he and Henderson both birdied number two. When the team had two more birdies and a par (the best two scores counted for each hole), they were already tied at -5 with the leaders who were many holes ahead of them. They also had two birdies and holes 8, 9 and 11, and it looked like a runaway. Only the team of Kevin Kisner, Lexi Thompson and Darren Clarke were close at 12 under after 13 holes.

Kisner’s team made it to 14-under, but when Andrade birdied 13 they were at 15 under and remained there for the win by one. “I saw that we were at 15 and everyone was in or a few behind, so I knew we could coast to the win,” said a happy Andrade after the event was completed.

On the last hole and only needing two pars all three players put their second shots on the green. Bradley putted first and just missed, leaving it two inches below the hole. When Andrade putted within an inch and tapped in, Bradley easily stroked his putt in for the championship.

Final standings from the 2019 CVS Health Charity Classic are as follows: